there is a natural number awareness…

There is a number awareness that is innate in humans and animals. Some animals as well as infant children display a natural sense of numbers and quantities. Cognitive Psychology has shown that small children as young as six months have an intuitive understanding of non-numerical parameters of magnitude.

Take a look at the images below:

How many birds are in the picture?

You are probably counting right now, and it should take you 2-3 seconds.

Now, look at the next image. How many birds are there?

You probably didn’t even have to think about it, you just knew as soon as you saw the image.

This is a natural quantity awareness that we all naturally possess. In terms of understanding and working with complexity it really helps to bear in mind that we are naturally hardwired to deal with information in maximum chunks of five.

A common number pattern we see in nature is the pattern of  five. In natural growth systems its often refered to as the five-fold symmetry and it can be found in starfish, cross sections of fruits and vegetables, in the growth patterns of flowers, quasicrystals.  There seems to be a natural order of progression for things evolving in a complex system that uses the order of 5 to replicate itself.
(Of course, we also see three and six as a prevalent growth pattern. For example, in snow crystals and crystal lattices, we see the six-fold symmetry and the hexagonal geometry) 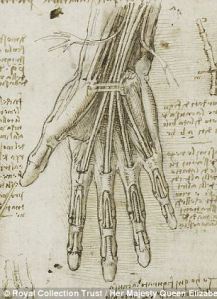 We see five in ancient stories and symbolism.  In Greek culture, the pentagram (a five pointed star) is related to Chronos, the Greek god of time, referred to as Saturn by the Romans.

The relationship between Chronos and the pentagram refers to the seeds of Chronos that were spread in 5 corners of the universe to give birth to the cosmos.Chronos is also often represented as a destructive force, perhaps in allusion to death and its relationship with linear time.  So it has a dual life-death symbolism. 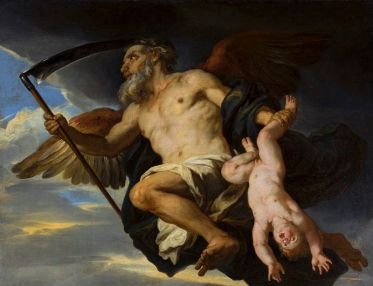 Chronos and his Child by Giovanni Francesco Romanelli

In the Bible, (the Judeo-Christian holy book) the 10 commandments are divided in two sets of 5. The first five guide our relationship with God and the last five relate to the relationship with each other. The church scholars who crafted the bible knew very well that to communicate and indoctrinate it helps to tap into our natural way of perceiving information. (For those of you interested in the role of five in the bible click here to learn more).

As a result of countless experiments used by scientists that ultimately culminated in what we now call the Scientific Method,  during the 17th Century, an experience based process to investigate the natural world was developed. It formally emerged during the Enlightenment (Also known as the Age of Reason), a European philosophical movement that proposed reason as the ultimate source of truth.

In its basic form, the Scientific Method can be divided in 5:

1. Make observations.
2. Develop a hypothesis.
3. Design an experiment to test your hypothesis.
4. Analyse the results and data.
5. Create a new Hypothesis.

This method is currently the pervasive method of enquiry in all modern sciences and it continues to permeate new areas of scientific investigation. Since its conception, more than 300 years ago, this rational approach to the material world has influenced, for better or worse, not just the rules of academic knowledge but also how we perceive ourselves and the world around us.

A similar 5 step process is also used in the world of Design. We call it the Design Process. Some designers use a four step process, some use a six or more step process and its stages are called different names, but as a structure of inquiry and action is very similar throughout the creative industries.

Using the Design Process as a life skill is incredibly empowering and many of the principles related to the discipline of design can be adapted to improve daily life. Just like the Scientific Method, the Design Process seeks to create an ordered approach to problem solving, it begins with a question, an observation of a phenomena or a problem and it requires a critical approach.

I find this methodical approach really helpful in more ways than just for designing or creating scientific hypotheses. I apply a five step approach to many things in life, especially when dealing with large, complicated tasks.

Let’s say you want to learn the basics of Indian cooking. Instead of looking at the huge amount of knowledge a professional chef has and trying to learn it all from the beginning, look at the subject as a whole and see if you can divide it into 5 large chunks of knowledge. Perhaps one would be the basic spices, another the traditional vegetables, another could be ayurvedic principles in food, etc.

Once you have divided them into five, divide the sections again into subsections, and continue doing that until the tasks become easy and achievable for you personally. This way you are creating a personalised learning system that is crafted to your specific level and to the way you understand the subject.

The way you divide and categorise will be different to anybody else, so your experience will be also different and more natural to you.

As a tool for personal development, you can use the 5 step process to deal with fear, anxiety, worry, etc.

This 5 Step Method is really helpful to get a better understanding of any challenging situation, from learning new skills, to fixing relationship problems, to fixing your vacuum.

I’ll leave you with this other amazing resource that taps into the power of five. This was developed by Mel Robbins, a speaker, consultant, entrepreneur, and courageous lady. It’s called the 5 Second Rule and it’s another tool I use constantly to tackle negative thinking patterns and procrastination. I really recommend you read the book and apply it!

This site uses Akismet to reduce spam. Learn how your comment data is processed.

Are you ready to join us?

Hi! I am Diana, product designer and user experience consultant based in the UK. I am a graduate of the Royal College of Art and a fellow at the RSA.