As some of you already know I am part of the team at Shake Your Power, a social enterprise that creates education and clean tech products for social good. One of our products is the DIY Maraca Torch and we launched it earlier this year at Bett Show in London.  This DIY kit is essentially a maraca that as you play it, it converts the kinetic energy from the movement into usable energy for light.

During our beta testing last December, we sent 100 DIY Maraca Torches to our friends at Pratham, one of the largest NGO’s for education in India. Our aim was to test our product and make sure children engaged with it and were able to learn from putting together the kits, and most importantly to provide them with a torch of their own. This was especially important as some of these children live in off-grid communities with no access to electricity.

We were thrilled to learn about their results earlier this month of February 2017. 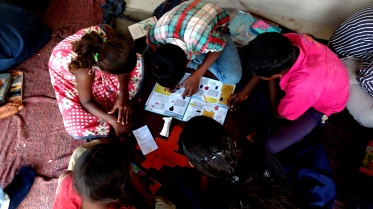 We created visual step by step instructions so children were able to follow to instructions without the need to read the english explanations, and they loved the assembly of the kit! But the most moving part was the reaction some of the children had once they put it all together and created light using the torch. They were absolutely ecstatic and amazed that what they just assembled would give them clean electricity over and over again.

There were some challenges the children had using some off the shelf parts, in particular some diodes that were difficult to place in the breadboards (we are already making changes to make the kit easier to assemble and reduce the frustration of some of the steps) and some instructions appeared to be unclear. But they figured it out and finished the torches.

Inspiring boys and girls in India

It’s in moments such as these, when we see our products impacting the lives of people, that we are reminded of why we do what we do. When we see children that have nothing, and for whom electricity is such a luxury, build something from scratch and making it work for them… its such an amazing motivation.

The last 2 years have been an incredible and challenging journey of getting Shake Your Power up on its feet, and it hasn’t been easy at all. We have had many moments of frustration and many setbacks, but when we see that what we are doing is giving people hope, well… it makes everything worth it.

And I guess that’s what I wanted to write about on this blog post, about the necessary ingredient of having a mission and staying true to it.

I know that if our mission wasn’t as important and real to us as it actually is, we would have thrown the towel ages ago. The process of creating products for the world’s poor and under privileged is difficult because it’s not a model designed for massive profits. It’s sustainable, sure, and it can eventually become a massively profitable venture, but its not the model where people go to invest for growth.

Only the people truly committed to their mission can withstand the hazardous journey. So, for all of you who want to create a business for social good, be sure to know what your mission is. make sure that that mission is so important to you that you are willing to sacrifice many things to achieve it. Be sure that the mission is an empowering and inspiring one so you can recruit people like you, people committed to making this earth a beautiful and just place for all.

If you focus on what your mission is you will not lose your path, regardless of the twists and turns your business might have to take to be born.

We always knew we wanted to empower the most disadvantaged and we chose to do it through clean tech and music because that’s what our founder’s journey was. It was unique because it was so personal. The mission was pure precisely because it was close to her heart. And for me, I’ve always wanted to use design as a tool to help people. I think designers purest role in the world is to use it as a tool for justice, empowerment and living sustainably with nature and all the living things we share the planet with.

If your why is clear, your path will be too.

This site uses Akismet to reduce spam. Learn how your comment data is processed.

Are you ready to join us?

Hi! I am Diana, product designer and user experience consultant based in the UK. I am a graduate of the Royal College of Art and a fellow at the RSA.